Sammy Azair Athlete of the Month 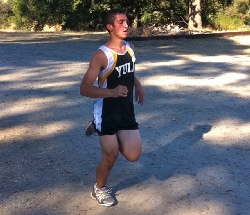 YULA is proud to announce that Samuel Azair was the Athlete of the Month for October 2011
YULA is proud to announce that Samuel Azair is the Athlete of the Month for October 2011.  Entering his senior year, Sammy was excited to get started -  so much so, that he held numerous practices with the returning runners throughout the summer months to make sure they would be ready for the season.  His hard work and dedication paid off.  In the month of October, he was our most consistent runner.  We had three challenging races, and he finished in the top 25 each time.  In the last race of the month, the Milken Invitational, he had his best race at YULA, finishing in 8th place. He is performing his best at the right time of the year.  The momentum of this race will help prepare him for the Liberty League championships in November.   Congratulations, Sammy.
Published November 3, 2011 Print