YULA Panthers Basketball Advances to Semi-Finals in the Cooper Invitational 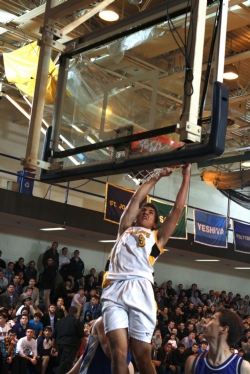 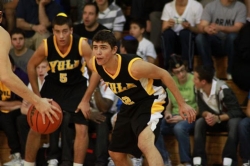 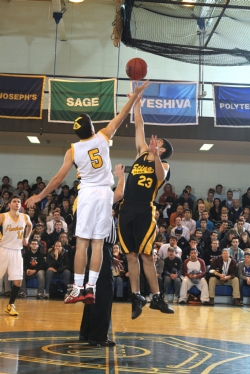 The season starts strong as YULA works to defend last year's championship title.
YULA traveled over 1800 miles to Memphis, Tennessee to participate the in Cooper Invitational, where last year YULA defeated New York basketball powerhouse, the MTA Lions,  54-45 in the tournament championship.  The team is optimistic that they will repeat this feat and bring home another title.  This optimism is rooted in the fact that the Varsity team returns 10 players from last year's team (which went 19-7 in the regular season), with more than half of last year's juniors playing prominent roles this year.  In addition to the returners, they have former JV MVP JoJo Himmelman being brought up to help anchor the defensive side of the ball. The Panthers’ faithful has been eagerly anticipating the varsity debut of the JV star big man.  Standing 6'6 ½", JoJo Himmelman has proved to be a dominating defensive force, something that will be greatly appreciated by the Varsity team.

On Thursday, your YULA Panthers began their defense of the Cooper Invitational with a big win over the Westchester Wolverines.  After the early game jitters by both teams, Westchester was able to withstand the YULA pressure.   Jack Gindi had a dominating first quarter, as he scored 11 of YULA's 17 points. In the 2nd quarter, the Panthers went on a 22-1 run, giving YULA a 23-point lead at the half.  It was the same story in the second half, as YULA held Westchester to a mere eight points and won by a final score of 67-22.

With only 14 hours of rest, YULA played in the second round of the tournament, facing the 8th ranked Hillel Heat. YULA started the game where they left off last night, making short work of Hillel and beating them 58-27.  Jack Gindi led the team with 17 points and Zack Wasserman added 17 as well, with five 3-point baskets. Next up for your YULA Panthers is either a rematch of last year's championship game with the MTA Lions or the hometown team, the Memphis Cooper Macs.

YULA has only two more wins to go before they can say that they are back-to-back champions.
Published November 10, 2011 Print