YULA Panthers in the Championship game 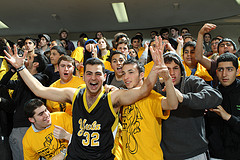 YULA Panthers top MTA Lions, 54-38 Earn Shot at Defending Title
In a rematch of last year's championship game, two elite teams led by two elite players faced off. With Jack Gindi and the #1 YULA Panthers playing against Jeremy Felder and the #5 seed MTA Lions, the competition was intense. Jeremy Felder hit a three to start the game and then hit another three off a YULA turnover. YULA responded with a blocked shot and an 8-0 run. Then, MTA scored only to have Jack Gindi hit a three on the following play. After a lot of missed baskets and two made baskets, YULA hit two threes to go up 19-12 at the end of the first quarter.

At the start of the second quarter, MTA looked a little bit lost. They gave up a 5-0 run and lost their star player, Jeremy Felder, to injury. When Felder returned things got a little better but not much. Even though MTA did score their first points of the quarter, YULA continued to hold their twelve point lead. After a YULA blocked shot and missed three pointer, MTA got the ball back but once again failed to put points on the board. At halftime the score was 28-14 YULA on top.

After a disappointing two point second quarter, the Lions defense began to improve defensively forcing turnover after turnover only to fail on the offensive side. Then the Lions defensive run came to an end when YULA burned them on an easy fast break. YULA continued to excel after Jack Gindi tipped in his teammate's missed shot. After a bad travel call by the referee, YULA rebounded and scored on the following play only to have Felder steal the inbound pass and put it up for two points. With three minutes left, MTA began to fall apart with YULA taking an eighteen point lead. With one minute left in the third, Zak Lenik of MTA had a great steal only to miss the wide open layup on the other end. With YULA up by seventeen and twenty five seconds left in the third, MTA began to feel signs of defeat. Going into the final quarter the score was YULA 40 MTA 23.

At the start of the fourth quarter it was back and forth, with each team countering the other team's baskets. Nevertheless, YULA still had a sixteen point lead and MTA was totally out of it. Then, MTA went on a 5-2 run and suddenly it was only a twelve point game. With four minutes left, MTA looked for boost of momentum with Shauli Naumberg at the line. His first shot rolled around the rim a few times but went out, and his second shot went in cutting the lead to eleven. Then after a lot of YULA turnovers, MTA scored again and cut the lead down to nine. MTA's run was cut short by a Jack Gindi jumper and a Zach Wasserman layup which extended the lead to thirteen. With a minute and thirty seconds left YULA closed out the game. YULA will once again be in the championship led again by star forward Jack Gindi who scored 19 points. MTA's high scorer was Jeremy Felder with thirteen points. The final score was 54-38 YULA.