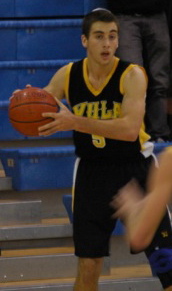 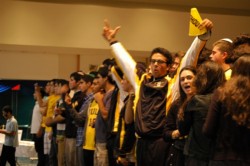 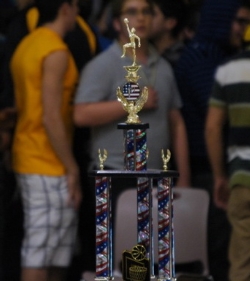 Panthers accomplished a rare feat by completing the impressive "Three-Peat," winning the Milken Tournament for the third straight year playing the Viewpoint Patriots in the final.  In the first quarter YULA got out to a great start, jumping on the Patriots with an 11-4 run. Following a quick timeout by Patriots head coach J.J. Prince, the Patriots went on their own run, closing the quarter with a 10-6 run.
The second quarter was much less about offense and more about defense. JoJo Himmelman and Leron Rayn were key contributors, holding Viewpoint to only 34% shooting in the quarter and held them to only 11 points. At halftime, YULA was up only two points, 27-25.
At the start of the second half YULA came out struggling, missing their first five shots and missing three straight free throws. Viewpoint was able to capitalize and take their first lead of the game. With little more than two minute left, Yisroel Solomon and Gavriel Stark went on their own 7-0 run.
Entering the fourth quarter up by eight, YULA may have started to see the end of the tunnel a little too soon. We turned ball over three times in a row, giving the Patriots extra offensive opportunities and cutting the lead down to one point with less then 23 seconds left. Jack Gindi was able to come through in the clutch with two key free throws, pushing YULA's lead to three points.
With 4.4 seconds left, the Patriots had a good-looking three-point shot in the right corner that fell short, and our celebration began. Congratulations Panthers! Our next game is Wednesday at 6 PM at the Westside J.C.C. against Pacifica Christian.
Published December 2, 2011 Print