Start of the season for your JV basketball team 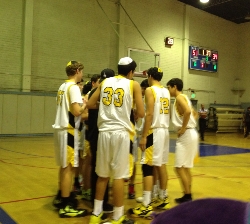 YULA Panthers compete against the AGBU Titians
Tuesday was the start of the season for your JV basketball team when your YULA Panthers took on the AGBU Titans. The teams were evenly matched until the second quarter, when Noam Posner and Moshe Wilner had to sit out most of the quarter due to foul trouble. With the big men not in the game, AGBU was able to capitalize and go on a 17-5 run.  At halftime, YULA was down 15 points. In the second half, Noam and Moshe stayed out of foul trouble and were able to pull YULA within five points late in the fourth quarter. Unfortunately, in a hard fought game, the JV team was unable to pull off the victory, losing 52-45. Come out and support your YULA Panthers: The next game will be at the JCC against Pacifica Christian Wednesday at 4:30 pm.
Published December 7, 2011 Print