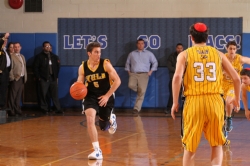 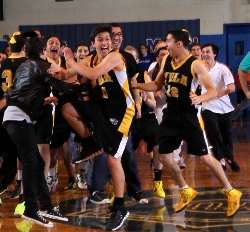 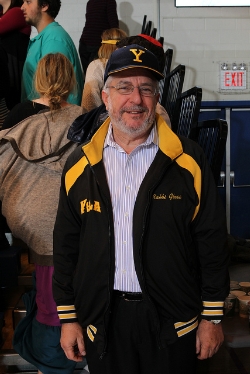 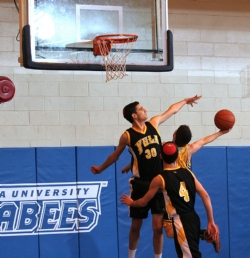 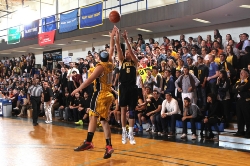 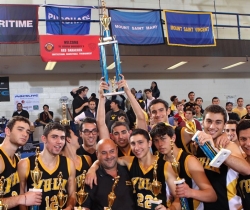 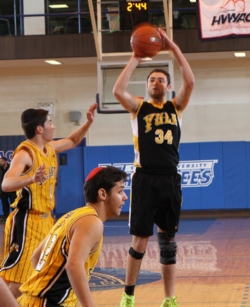 YULA Avenges Last Year's Loss Against SAR to Win Seventh Red Sarachek Championship
The Panthers victory not only YULA its record seventh Sarachek Championship, it brought together the YULA family. Current students and YULA alumni from across the world - from L.A. to Israel - watched the high-definition video, cheering, and shouting for our Panthers in unison as they watched every hard-fought basket. Below are details of the final game, adapted from Macslive.com, as well as a list of players and coaches.

In a packed Max Stern Athletic Center on Championship Monday, senior guard Jack Gindi led his #2 YULA Panthers from Los Angeles to a 45-35 victory over the #1 SAR Sting in the Tier I final. Gindi’s 17 points and YULA’s stifling defense was too much for SAR to overcome down the stretch. For YULA, this win meant more than the Sarachek championship; it meant revenge for SAR's wins in last year's championship and in YULA's gym earlier this year.

After SAR won the opening tip, YULA got a steal. Gindi got to the line and converted a pair of free throws to set the tone for what was an excellent game by the YULA star. Both teams missed a few outside shots early, and played superb interior defense. In a low-scoring quarter, Zack Dicker got SAR fans going with a 3-pointer as time expired, to give his team a 9-7 lead.

At the start of the 2nd quarter, Wasserman found himself alone behind the arch and drained a three to pump up the Panther fans. Midway through a quiet quarter, Gindi hit a three to put YULA up 13-9. Gindi threw his arms up in celebration after the shot, as this defensive battle made the 4-point lead seem like a 24-point game. SAR tried to respond, but missed some easy buckets off of great passing from Dicker. SAR would score only 3 points in the frame, and YULA went to the locker room with a 14-12 lead.

After shooting only 22% in the first half, SAR came out with more aggressiveness on the offensive end as Ariel Friedman hit two shots from behind the arc to give his team a 20-19 lead. Thanks to great defense from SAR, YULA was unable to generate much offense until YULA guard Zach Wasserman was left open for his second big three of the game, giving his team the lead with one minute to go in the third quarter. A quick SAR basket by Jonny Nulman at the end of the quarter left the game tied with 8 minutes to play.

With the gym louder than ever, Gindi opened up the 4th with a three pointer to give YULA the lead. YULA had many chances to extend their lead in the first few minutes, but were unable to convert in transition thanks to SAR’s superb effort getting back on defense. Baskets from JoJo Himmelman and Yisroel Solomon gave YULA a 6 point lead, its largest of the game. SAR Coach Rafi Halpert called timeout to calm his players and attempt to stop YULA's momentum. Solomon hit another shot immediately after the timeout, and YULA looked to have full control of the game. Gindi sealed the win with a little over a minute to go, hitting a jumper. From then on, it was up to the Panthers to convert their free throws, and Gindi and guard Gavriel Stark did just that. Stark finished with 10 points, with 8 coming from the free throw line in the final quarter.

Congratulations to the team and our coaches!