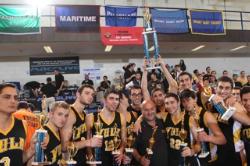 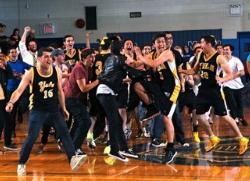 It's positively historic. The 2012 YULA Panthers varsity basketball team went 27-7 overall, winning the Cooper, Milken, Hillcrest Christian and Sarachek Tournaments.
The excitement couldn't have been greater for the final Sarachek Tournament game, which was watched live on the Internet by YULA students, families and alumni from Los Angeles to Israel.

"It was magical, transformational," said Head of School Rabbi Glass, who attended the games at Yeshiva University. Vice Principal Rabbi Schreiber and most of the boys' rebbes also attended and were as enthusiastic as any student.

Coach Dave Winik gives the seniors a lot of credit.

"We had six seniors on the team, and for five of them, this was their third year playing varsity," he said. "Over the years they've been through a lot, and all that experience helped them in a pressurized situation to be able to focus and come through with big plays when they needed to."

Big plays like the clutch shooting by 1st Team All Tournament Matt Reich in the semifinal game against Shalhevet.

"What Matt Reich did to get us into overtime, not many players could do," Coach said. "He made three free throws at the end of regulation to send the game into overtime, then in overtime, with less than three seconds to go, he made a three-pointer. And that was the game."

But it wasn't magic that made this team the winningest basketball team in Jewish high school history. It was blood, sweat, tears - and a willingness to learn.

"Over my three years of being on the team, I have practiced over 1,200 hours - shooting, running and being disciplined by the coach," said team co-captain and Tournament All-Star Yisroel Solomon. "The coach is a father-like figure who teaches you the game of basketball as well as lessons and morals off the court… I've learned many lessons from either an individual teammate, a coach, or even a fan."

Coach Winik says he'll miss all the boys who are graduating. He'll also miss their talent, of course, but there are other players coming up in the ranks.

"Leron Rayn couldn't play at all during the tournament because he was injured," Coach Winik said, "and sophomore JoJo Himmelman took his place and played every minute of every game and did outstanding," he said.

Varsity basketball has not only brought notoriety to the players and the school, but has forged lasting bonds between the boys.

"The 13 boys and the coaches who you see day in and day out are your family," said Solomon.

"Two of my best friends are on the team, and it's brought us closer," said senior Zack Wasserman. "We'll all definitely stay in touch after we graduate."

"I had an amazing career at YULA," said senior Jack Gindi, Tournament MVP. "I've made friends, excelled in academia and athletics and had meaningful religious experiences as well."

The team's hard-won success took place despite an extremely demanding environment that includes a rigorous dual curriculum and a heavy practice schedule -- offsite. The boys who play YULA basketball next year have something to look forward to: A state-of-the-art gymnasium will be built onsite at the YULA Boys High School in the near future.

To see dozens of pictures from the Sarachek Tournament, see the YU Flickr Photostream.