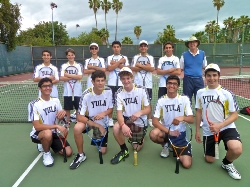 Golf and Tennis Teams Qualify for Playoffs
Tennis - YULA’s tennis team finished the 2012 season with a 4-5 record, posting wins over Windward, Oakwood, and New Community Jewish High School. We finished tied for third place in the Liberty League. Our team was headed by Jonah Anderson, who ended the regular season with a 12-9 won-lost record. Jonah, in singles, and our number one doubles team of Matt Guenoun and Yonah Hiller, qualified for the season-end Liberty League tournament. Playoffs start today at Oakwood at 2 PM.

Volleyball - Led by senior captains Jonathan Goldstein and Jonathan Hirsh, the Panthers volleyball team is off to a 6-7 season and are tied for second place in League. Their last game of the season is against Holy Martyrs is today 4 PM at Holy Martyrs in Encino.

Baseball - Baseball has had an up-and-down year with many obstacles, none more obvious than the injury to star pitcher Josh Schoen. With Josh out, Moshe Bogoratt has become the team's starting ace. Moshe has pitched masterfully; as a result, our baseball team is just two wins away from securing their second straight playoff berth. The next game is, tomorrow, May 1 against Pacifica Christian at North Venice Little League at 2 PM.

Track and Field - This is our first year in competing in the Coastal League and, for many of our athletes, the first time on the track and field team. The team is led by senior captain Sammy Azair, who has finished in the top 10 in the 100m and 400m in a field of 70 athletes around the area. Our final League match is May 3 at 3 pm at West LA College.

Golf - In only its third year of existence, our YULA golf team finished third in the Liberty League. Along with team success, we had three individuals qualify for playoffs: Zack Wasserman, Mendel Valenci, and Spencer Weiss.
Published April 29, 2012 Print