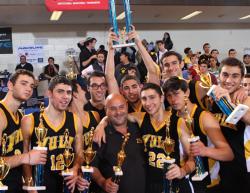 Winik began his career at YULA in 1991, when he was the JV Head Coach and the Varsity Assistant to legendary Coach Ed Gelb. In 2006, Dave Winik took over the Varsity Head Coach responsibilities, and the program didn't miss a beat. Winik compiled a 101-46 overall record while winning back-to-back Cooper Invitationals, three straight Milken Classics, and was a part of all seven Sarachek National Titles.
Winik has been the coach to hundreds of athletes, who looked to him not only as a coach but also as a trusted advisor. In an article about the Sarachek Championship, Team Co-Captain and Tournament All-Star Yisroel Solomon said, "Coach is a father-like figure who teaches you the game of basketball as well as lessons and morals off the court."
YULA plans to induct Coach Winik in September as the first member of the soon-to-be-created YULA Sports Hall of Fame. Athletic Director Carey Many said, "He helped build YULA's reputation as a national basketball powerhouse in the Jewish community, and we are forever grateful for all his hard work, persistence, and his ability to bond with our boys."
During his historic tenure at YULA, Coach Winik also worked at UCLA as an Information Technology Accountant, and he will continue his role there. He is looking forward to spending more time on the golf course.
YULA will announce a new Head Varsity Basketball Coach when it concludes its search.
Published June 14, 2012 Print