YULA Back at Cooper Invitational to Defend the Title 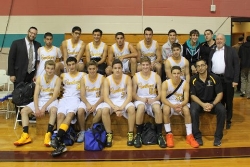 YULA Panthers Basketball season starts strong as YULA works to defend last year's championship title and win first place for the third straight year. Today, YULA advances to the Elite 8 in the Cooper Invitational.
YULA traveled over 1800 miles to Memphis, Tennessee to participate the in Cooper Invitational, where last year YULA defeated Ida Crown ACES 53-43 in the championship game. YULA has won this tournament for two straight years and is attempting a rare three-peat. This year will be challenging as as the previous two years had the same core group of players led by all-tournament players Jack Gindi and Yisreol Solomon. The team had 6 seniors graduate and 4 them were starters from the championship teams.
Although this year's team is young and inexperienced, new Head Coach Eli Hami likes is chances. Hami says the team is one of the most talented teams that he has coached. With seniors Leron Rayn and Junior JoJo Himmelman leading the team, Coach Hami is optimistic that they will bring home another title. This optimism is rooted in having a productive summer session and fall practice season. "A learning curve is expected, but once we come together we will be a great team" says Coach Hami.
Coach Hami had the opportunity to see his team in action today at the Cooper Invitational. As expected, there were some great high and some low lows. YULA first game was against 14th seeded Rambam Mesivta. The Panthers started the game with 5 turnovers in their first 7 possessions and looked like a young and inexperienced team. Three minutes into the first quarter Menachem Solomon was able to steer the ship in the right direction and sparked the team to a 23-5 finish to the 1st quarter. He accounted for 12 points and 2 assists during that run. The run lasted for only 6 minutes but it was the difference in the game. YULA showed their inexperience and showed their potential all in one game. Just like coach Eli Hami stated " the question I ask myself is not if this team will be great but when and for how long." Your YULA Panthers have the opportunity to answer that question tomorrow when they play their next game against the Chicago Community TIGERS the time is 7:30 AM.
Published October 25, 2012 Print