Clipper Darrell is a Panther Fan too! 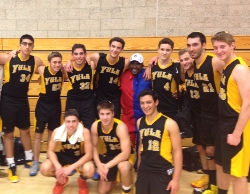 The YULA Boys Varsity basketball game against Holy Martyrs had a celebrity cameo in the stands. Clipper Darrell, a dedicated Clipper fan who shows up to every Clipper game in his custom-made red and blue Clipper suit, joined the YULA crowd in the stands as they cheered on the basketball team. The winner of the game would move on to the championship game of the liberty league season-ending tournament. As the game started, Clipper Darrell got the crowd going with a loud "Let's Go Panthers!" chant, and although the game was being played in Oakwood's gym, it felt like a YULA home game. After a hard fought first half, the game was tied 19-19 at halftime. Clipper Darrell continued to take pictures with fans, and make sure there was energy in crowd, even learning new YULA chants from the Rebbeim. As the game neared its end, YULA was down two points, with about 12 seconds left. Jordyn Schoenfeld inbounded the ball to JoJo Himmelman, right by the basket, who made a quick move and banked in a layup to send the game into overtime. In overtime, the team faced a similar situation as they were again down by two points, with eight seconds left. Again JoJo got the ball right by the basket, but this time, missed his first attempt at a layup. He quickly rebounded his own miss, put the ball back up, scored, and got fouled along the way. He stepped to the line, with the game tied, and two seconds left. He nailed the free throw, and then the victory became official as Holy Martyrs missed a deep prayer as the buzzer sounded. As the team were celebrating, they made sure to get a team picture with Clipper Darrell before they headed to the locker room.