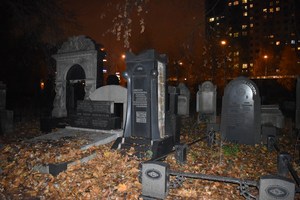 Reflections on day 1 by Yoseph Hier

Traveling from Los Angeles to Poland was not expected to be an easy trip. However, the commute was anything but difficult. Everyone arrived at LAX at 1:15pm. We went through security. We were early to our flight which gave us plenty of time to daven mincha.

We arrived in Paris and had plenty of time to walk around the airport before our flight to Poland. We davened mincha in the airport and then prepared for our flight.

We arrived in Warsaw at 6:30pm. Everyone was thankful that they followed Rabbi Sufrin’s instructions to bundle up because it was freezing outside.

We went straight from the airport to the Warsaw Cemetery. It was very sad to see a cemetery with nearly 450,000 Jews and to hear that Jews in the Ghetto were allowed an average of 180 calories a day. One of the most tragic sites within the cemetery was the mass grave. Rabbi Eli Marcus, our Rabbinic Scholar and tour guide for the trip, told us of people who agreed to be buried in the mass grave on condition that their family rebury them after the war. After hearing this, it was extremely saddening to see that the mass grave still existed because many no longer had family to rebury them after the war.

We visited the graves of many gidolim, such as Rav Naphtali Tzvi Berlin and Rav Chaim Soloveitchik. It was very moving to hear how Rav Naphtali Tzvi Berlin’s would starve herself just so that she could pay for her son to get a proper Torah education. Hearing how much Rav Naphtali Tzvi’s mother sacrificed for her son’s education made me realize that I should be more dedicated to my Torah studies. Soon after we visited we drove to Umshlagplatz: a train platform upon which Jews stood before they were transported from the Warsaw Ghetto to the Treblinka Extermination Camp. The inspirational singing and davening really set the tone for how special of a trip this would be. Overall, the first day has been eye opening. I’m shocked that what we saw today is just a glimpse into what we will see and learn this week.